Skip to content
Richard believes passionately in partnership working as a means of achieving “more with less”. He was Chairman of one of the two UK trade associations for cardboard packaging for 15 years, and on the Council of the other for 10 years. In both arenas he learnt that the whole is always greater than the sum of the parts when working in partnership with like-minded individuals and organisations.

Richard considered it a great honour to serve as Treasurer of the Anchor Society in 1999, and elected President in 2006. He  feels very strongly about loneliness and social isolation amongst older people believing that modern society is rich enough and inventive enough to do something about it.

He played a major part along with with Bob Durie and Paul Rowe in the founding of LinkAge in 2008. The principle aims of LinkAge are to address loneliness and social isolation, and improve health and wellbeing amongst older people, and to build resilient and cohesive local communities and neighbourhoods.  Richard served as Chairman of LinkAge between 2011 and 2017 and is  Currently Secretary and Treasurer. 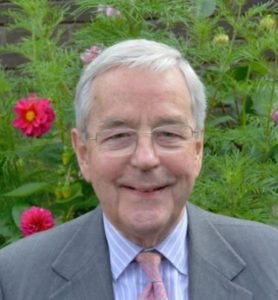